By David Zenlea / Photos by A. J. Mueller

*If you are interested in having your Tesla Model S armored visit www.armormax.com or call 801.393.1075 and speak to someone at International Armoring Corporation. 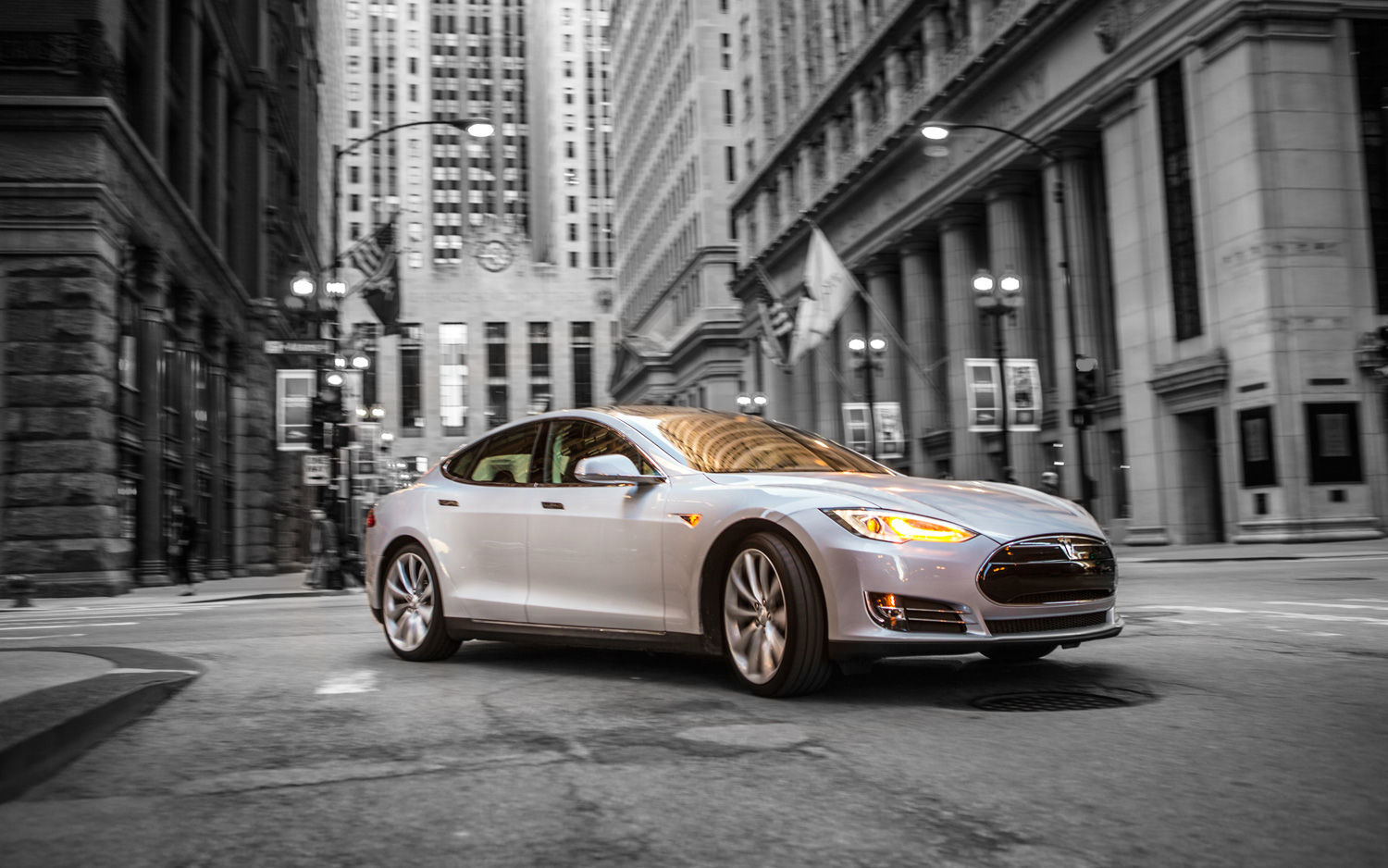 Last summer, Automobile Magazine editors had the opportunity to interview Elon Musk, CEO of Tesla, as the company launched its all-new electric sedan. A well-known industry insider warned us not to fall for Musk’s smooth talk. “Don’t bring any cash,” he said. “Because you’ll be offering to give it to him twenty minutes into the interview.”

To say there’s healthy skepticism regarding Tesla and its new wundercar is an understatement: in many industry circles, it borders on outright hostility. We understand why. Building a car — any car — is really hard. Musk, the PayPal billionaire whose automotive accomplishments were limited to converting 2350 Lotus Elises to run on batteries, was not only proposing a class-leading sport sedan, but he promised it would have a more advanced electric powertrain than anything global automakers could muster.

He was doing this with our money — your money — courtesy of a $465 million loan from the Department of Energy, and he claimed to be doing it for our own good: “Since we are not appropriately pricing the CO2 capacity of the oceans and atmosphere, then the only way I could think to address that was with innovation.”

We believe the proper business term to describe such a gambit is chutzpah.

We left the interview with our wallets no lighter, eager to see how the Model S would perform in the real world, removed from Musk’s spin and Tesla’s chaperones. As it happened, that opportunity arrived at our Automobile of the Year exercise. That’s a rather intimidating environment to make a first impression, especially given that this year’s field was the strongest in recent memory. We weren’t expecting much from the Tesla other than some interesting dinner conversation as we considered “real” candidates like the Subaru BRZ and the Porsche Boxster. In fact, the Tesla blew them, and us, away. 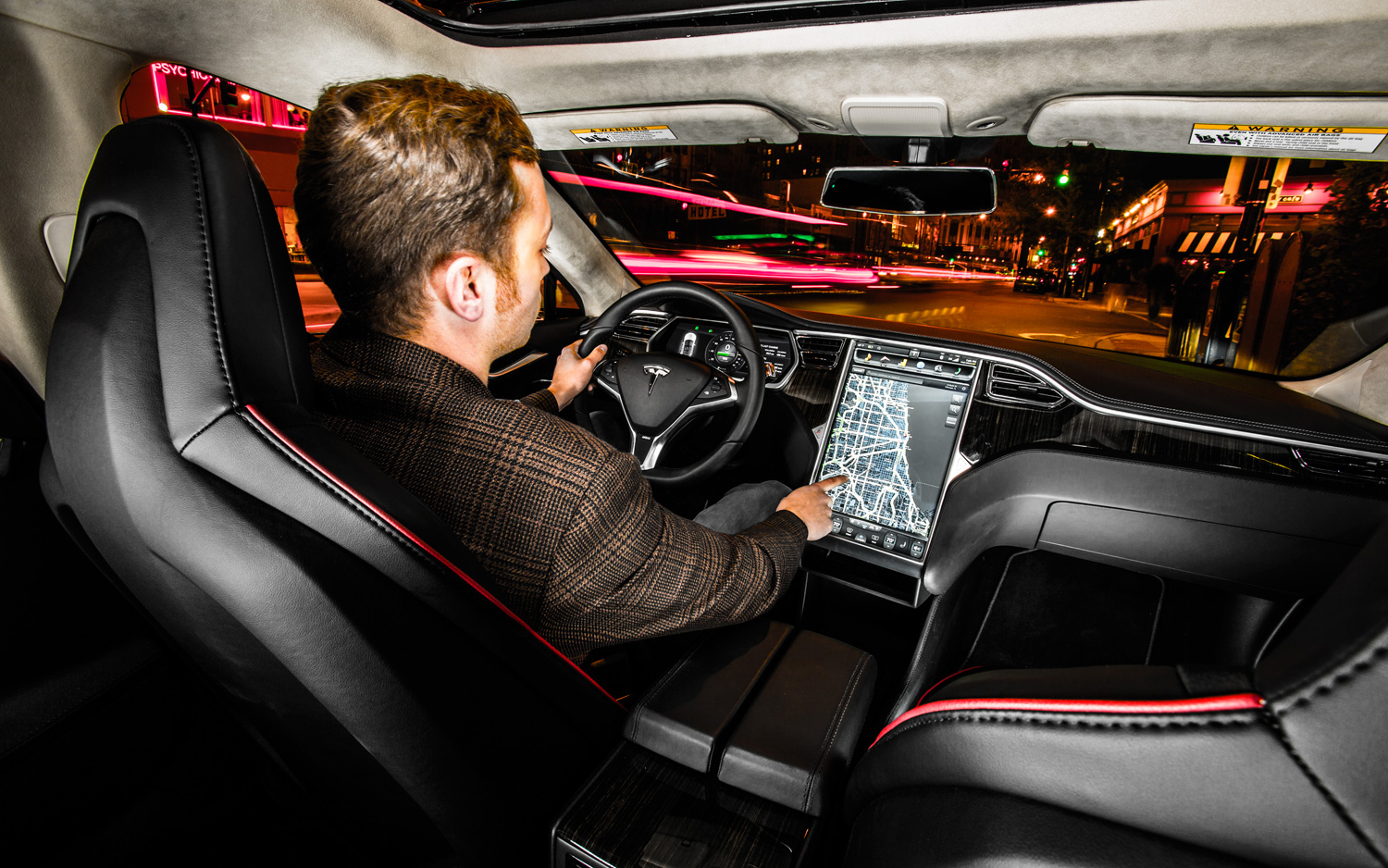 Actually, the Model S can blow away almost anything. “It’s the performance that won us over,” admits editor-in-chief Jean Jennings. “The crazy speed builds silently and then pulls back the edges of your face. It had all of us endangering our licenses.” Our Model S was of Signature Performance spec, which means its AC induction motor puts out 416 hp and that it blasts to 60 mph in 4.3 seconds. Even those numbers — positively absurd for a large sedan that uses not a lick of gasoline — fail to communicate how crazy it actually feels. “It’s alarming to jam the accelerator of such a big car and have it surge forward so quickly and so quietly,” says copy editor Rusty Blackwell. Like most electric cars, the Model S generates its torque almost instantly. Unlike most electric cars, Tesla’s torque amounts to a prodigious 443 lb-ft, all of which goes to the rear wheels. The only indicators of your stunning momentum are the rush of scenery around you, a faint whine, and the digital speedometer’s difficulty keeping pace. “Driving the Model S is decidedly not like piloting a Nissan Leaf or an electric Smart,” notes road test editor Christopher Nelson. Contributor Ezra Dyer, meanwhile, was so impressed that he arranged an informal drag race to 100 mph with a 560-hp BMW M5. The Model S won. “It bears repeating: this thing is silly quick,” he concluded. 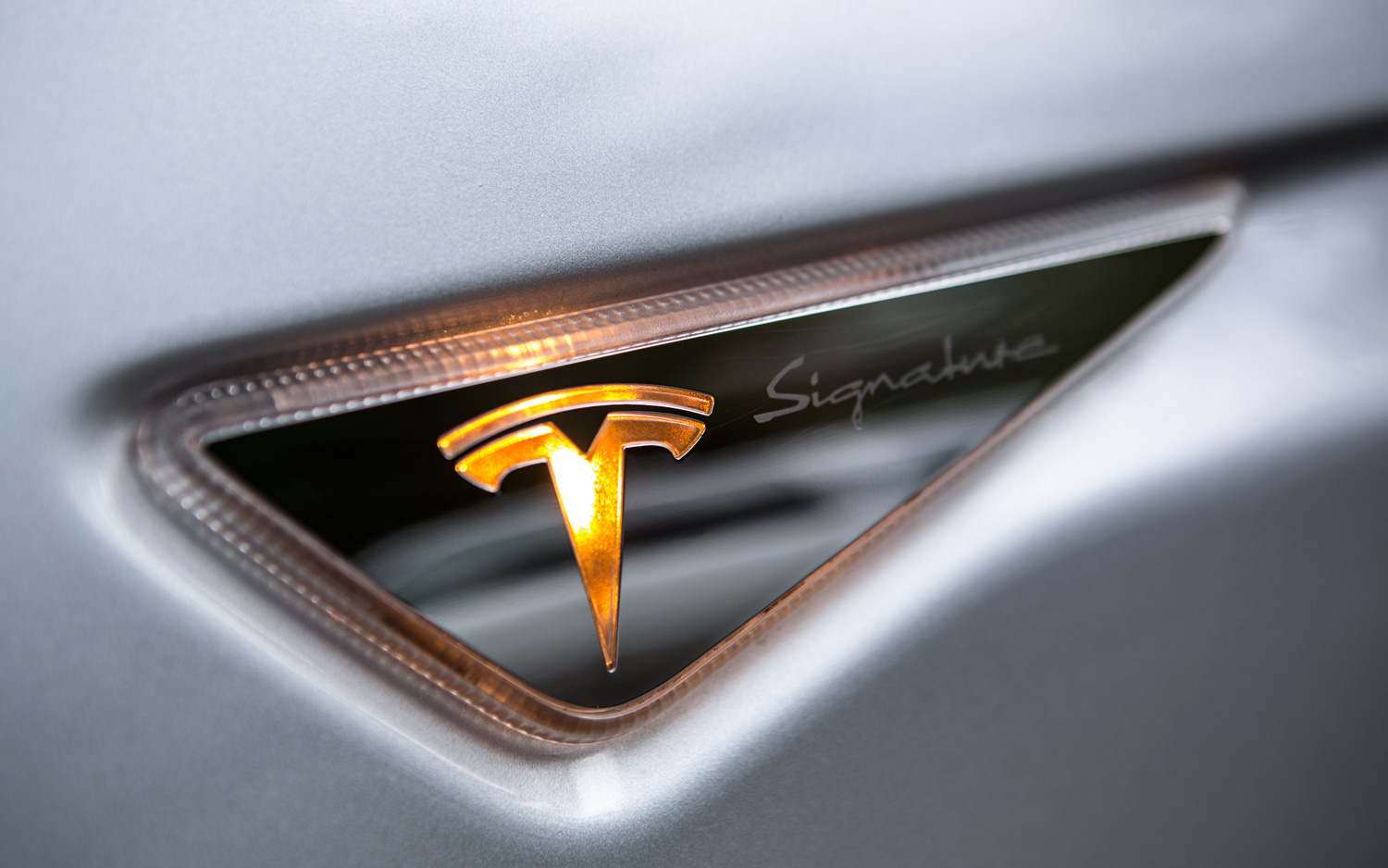 Of course, straight-line speed is hardly our only qualification for Automobile of the Year. Tesla’s first car, the two-seat Roadster, was even quicker but never made a serious bid for our award. That car was something of a one-trick pony — everything else about the $100,000 Roadster felt like the $50,000 Lotus Elise on which it was based. The Model S, developed by Tesla from the ground up and assembled at its factory in Fremont, California, is a holistic and incredibly novel experience.

The Model S looks conventional enough — somewhat disappointingly so. But that impression fades as soon as you walk up to it and the flush door handle powers out to meet your touch. Climb into the Tesla for the first time, and you’re liable to spend a few minutes searching for the ignition button. You won’t find it — the car turned on when you sat down, and it’s now waiting for you to shift into drive and glide away. The cabin is airy, modern, spacious, and impeccably trimmed in leather and wood. A flat battery pack and a rear-mounted motor yield a completely flat floor and a large, useful center-console storage area (the Model S uses a column-mounted shift lever supplied by Mercedes-Benz). Additional storage areas, such as map pockets in the door panels, might be nice but would spoil the interior’s appealing, Bauhaus simplicity. 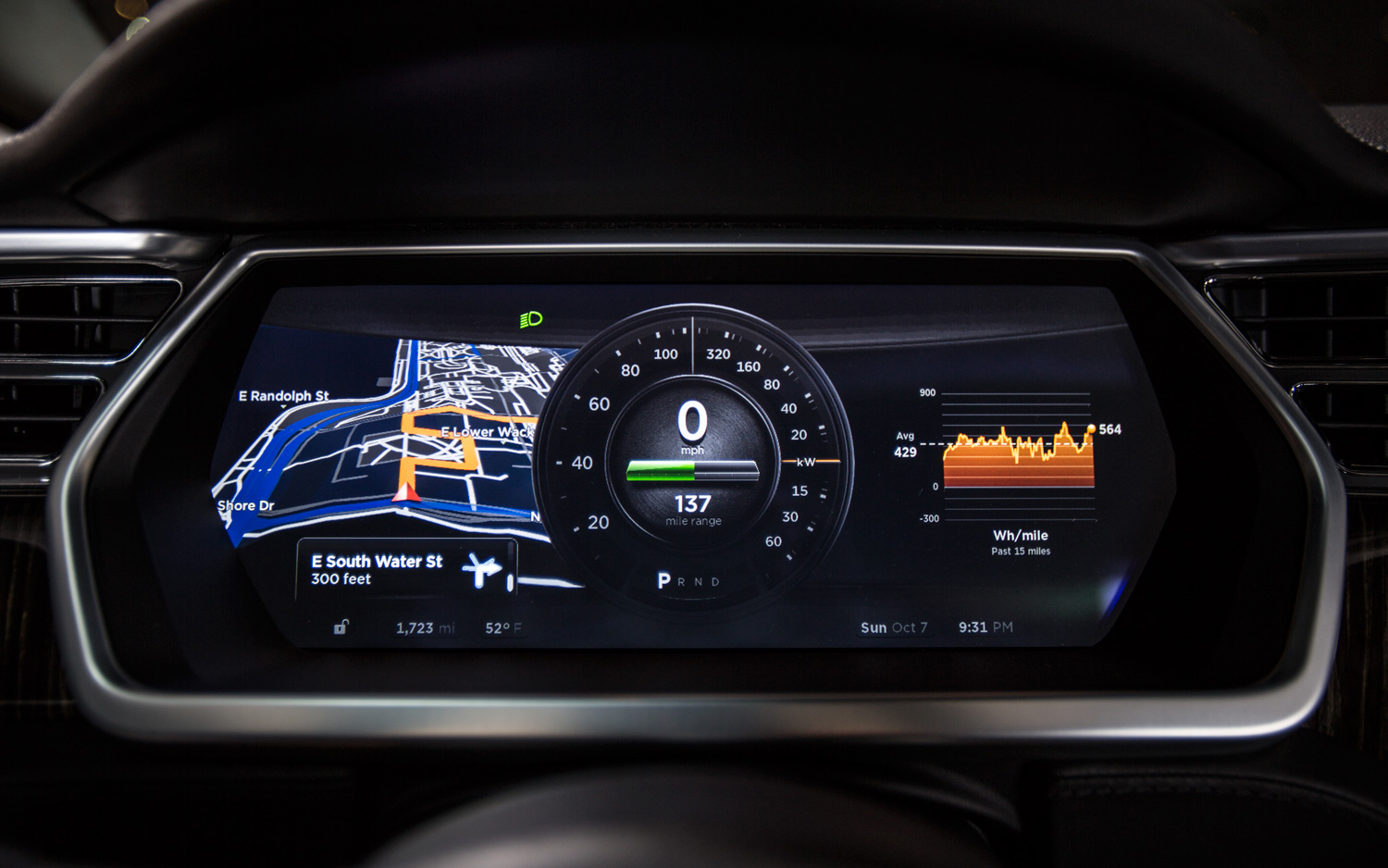 An absolutely enormous, seventeen-inch touchscreen dominates the dashboard and features the controls for everything from the radio to the steering effort. That sounds like a recipe for disaster, but here it works wonderfully. Oh, yeah, and you can surf the Web on it, as well. “We turned a lot of preconceived notions on their head and said, ‘Why does it have to be that way?'” says Tesla lead designer Franz von Holzhausen. Of course, practically every new car claims to be revolutionary. But this one actually feels like it is, to the point that many of us were reaching outside the automotive lexicon to describe it. “It reminds me of the first time I used an iPhone,” gasped associate web editor Ben Timmins.

There’s much about the Model S, which Musk himself refers to as “Tesla’s Macintosh,” that has an innovative, Apple flavor. As with the tech giant’s slickest products, there’s a sense that even the smallest details here have been lavished with attention in order to be as distinctive and elegant as possible. To open the panoramic sunroof, for instance, one brings up an overhead image of the car on the touchscreen and literally drags the roof as far back as desired. Why didn’t anyone think of that before? Then there’s Tesla’s controversial but intriguing strategy of distributing its products through company-owned boutiques rather than conventional dealers. It’s being run by George Blankenship, who set up those posh Apple stores. Finally, it’s hard to ignore that Tesla has in Musk a Steve Jobs-like figure, a relentless leader who guides the company’s direction. “They’re both brilliant, both thinking about things that other people won’t be thinking about for twenty years,” Blankenship says.

For all its high-tech novelty, the Model S does an exceptional job at the things we expect any high-priced sport sedan to do well. The electric power steering is nuanced and well-weighted, with natural buildup just off-center. Through corners, the Model S exhibits impressive body control and vacuumlike grip despite weighing more than 4500 pounds. Editors also raved about the suspension’s ability to soak up bumps that tortured other test cars. It was just as impressive on the racetrack — yes, we took it on the track. “All that speed, along with powerful braking, superflat handling, and sharp steering, gives you the sense that you’re invincible,” marvels Jennings. And although the exterior may be lacking in gotta-have-it character, it deserves credit for achieving a claimed 0.24 coefficient of drag — better than a Toyota Prius or a Chevrolet Volt — without those cars’ gawky styling. The only concession to weirdness and egotism are the optional rear-facing third-row seats, which Musk wanted so he could ferry around his many children.

The car’s professionalism owes to the fact that, despite its Silicon Valley sheen, Tesla employs plenty of people who know a lot about building cars. That begins with von Holzhausen, who penned the Pontiac Solstice, our 2006 Design of the Year, before moving on to Mazda. He joined Tesla’s design team four years ago — when Tesla basically didn’t have a design team. “There was nothing here,” he says. Huibert Mees of the Ford GT program led development of the Model S’s chassis components, and the steering was likewise developed by Ford and Lotus veterans. Despite Musk’s domineering reputation, the employees we’ve spoken to say he has a relatively hands-off management style. Continuing the comparison with the famously involved Jobs, Blankenship notes, “Steve hired incredibly bright people to get done what he wanted to get done. I think Elon hires incredible people and expects them to do what they were hired to do.”

You’ll note that we haven’t even discussed Tesla’s raison d’etre, which is, in Musk’s words, “To accelerate the advent of electric cars.” That’s another credit to the Model S’s overall execution and seductive powers. “The electric motor does not define this car,” says Nelson. But it is, at the end of the day, what makes this very good sport sedan an absolute game changer. The Model S’s range, rated by the EPA at 265 miles with the largest battery, finally fits the American conception of driving. Want to take the family from Washington, D.C., to New York? No problem. Stop for an hour at one of Tesla’s Supercharger stations being installed throughout the country, and you can travel on to Boston. The even bigger psychological advantage, though, is the freedom to go about your daily life, with all its spontaneity and last-minute shopping trips, without the fear of running low. Electric cars that participated in past Automobile of the Year competitions have required special testing procedures — shorter drive routes, strict guidelines against aggressive driving, industrial charging trucks. The Model S wore no such kid gloves. We plugged it in at night and then drove it all day — and drove it hard.

Granted, this freedom doesn’t come cheap. A Model S with an 85-kilowatt-hour battery, like the one we tested, starts at $78,750 (before a $7500 tax break). Less expensive versions have smaller batteries and shorter ranges, starting with $58,570 for 160 miles (again, before deductions). Put another way, though, the cheapest 85-kWh Model S offers more than three times the range of a Nissan Leaf for little more than twice the price. The battery pack should also be rather durable thanks to liquid cooling. But the most important factor here is that, more than any electric car that has come before it, the Model S feels and drives like a gasoline car of the same price. “There’s still a lot of novelty in driving an EV,” says senior editor Eric Tingwall, “but with the Model S, that’s no longer the only reason to drive one.” Design editor Robert Cumberford is more succinct: “I would happily own one.” 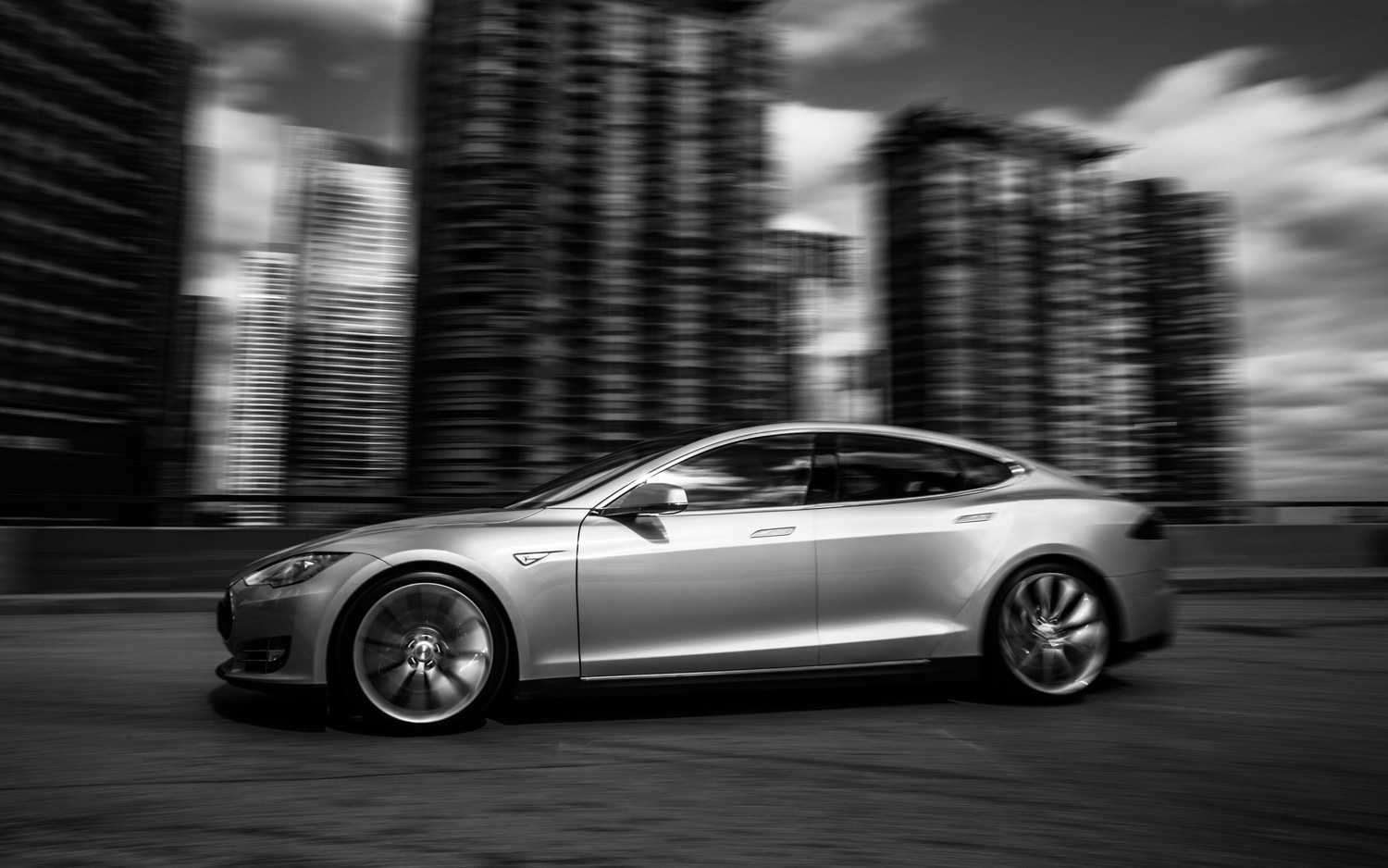 But you might not be able to get one. Only 250 sedans have been delivered to customers as of this writing — a rounding error for any mainstream automaker (some 13,000 customers have put down at least $5000 as a reservation). Musk himself admits that Tesla’s path to viability is far from complete. “There have been car company start-ups before. The real challenge is to ramp up production. Then we’re a real car company.”

We can’t say for certain whether Tesla will be able to make that happen. The auto industry is tough enough for a giant like General Motors. What we can say with this award is that Tesla deserves to succeed. It has managed to blend the innovation of a Silicon Valley start-up, the execution of a world-class automaker, and, yes, the chutzpah of its visionary leader. The result is the Model S. It’s not vaporware. It’s our Automobile of the Year.